After posting about the Snapi, the company's marketing person contacted me and offered me a sample, as trying it might change my mind. In the interest of fairness, I said yes. 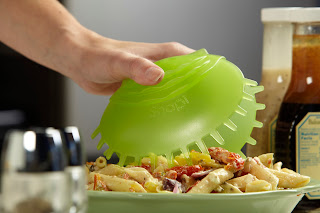 This is not a photo of me using the Snapi.

Pros:
The kids were very excited about the Snapi. Here's why:
-it looks like a clam and my daughter is a budding marine biologist
-it's fun to open and close
-it looks like a toy
-you can close it and open it using separate buttons
-you can use it to pinch your sibling's arm and clothing

Cons:
-It sometimes gets stuck (open or closed) when you're using it.
-It doesn't always stay closed in the drawer, even though it has a little button to push to keep it closed. That means it pops open in the drawer, making the drawer difficult to close.
-Because of the fangs at the end, it's impossible to pick up small items, like pomegranate seeds, finely diced onions, beans and other things that I put in my salad. I had to find another tool to get those out.
-If you don't put it in the dishwasher (it's dishwasher-safe on the top shelf), it's messy to clean - especially with blue cheese chunks sticking on all the fangs (yes, I also put blue cheese in my salad, and that doesn't get goopy on the salad servers, but does on the Snapi)
-it fell over in the salad bowl, getting dressing on the outside of it.

Conclusion: it's cute, but I would not buy one for myself or anyone else. Unless maybe the person only had one arm and really needed a tool to pick up food, and didn't like using tongs. I'll try it on the next pasta dish I make, but I may give it to my marine biologist daughter as a toy.

Do you have a stupid product you'd like me to review? Send me an email at mystupidproducts AT gmail DOT com.
Posted by Debbie Abrams Kaplan at 2:55 PM

Email ThisBlogThis!Share to TwitterShare to FacebookShare to Pinterest
Labels: product