Is your baby crawling across shards of glass and hot coals hardwood floor? Then you really should get your baby KNEEPADS. Because your baby might get a bruise, scratch or callus.

Didn't your mom tell you how hard it was in the old days? You had to crawl around on the gravel and dirt floor all day, while she had her very own gardening knee protectors? 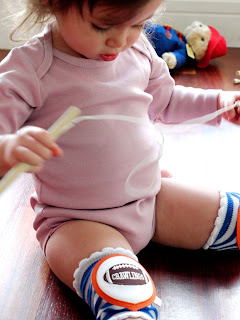 Look how happy this child is sitting on her bum, with her very own knee guards. For just $20 a pair, you can slide these puppies on when you change your kid out of jammies in the morning. And she can wear knee pads all day long. You never know when she might crawl and hurt herself!

I shake my head when I see some of the polls sent to me by PR people.

JUMPING SHIP
Obviously the sinking of the Costa Cruise ship is making a lot of headlines. Hey! Let's capitalize on that by polling people about what THEY would do if their cruise ship sank. The results were just SHOCKING.

-Only 24% of those ages 65+ would jump in and try to swim to safety versus 63% of those ages 18-29.
-Republicans, Democrats and Independents were within a percentage point of each other for agreeing to jump in. Hooray! The political parties agree on something!
-15% of the same youngsters would stay on board hoping for rescue, while 44% of the old people would stay put.
-33% of Democrats would stay put as well, while 26-27% of Republicans and Independents would trust in the government to save them.

GIRL SCOUT COOKIES
While I do love Good Morning America, the poll they conducted with SodaHead on the most popular flavor of Girl Scout cookies was just stupid. The answer? I think you already know.
Posted by Debbie Abrams Kaplan at 12:37 PM No comments: